In my 2014 reading recap, I discussed how a number of familiar names dominated that year’s Top Ten, and I predicted that several of those names would resurface in 2015 – names like Joe Lansdale, Ace Atkins and Stephen King. Well, not only did that prediction come true, but I’m making a similar prediction for 2016. Lansdale has both a Hap and Leonard novel and a Hap and Leonard short story collection on deck; King has the finale of his Bill Hodges trilogy ready to go; and Atkins will once again favor us with new entries in his Quinn Colson series and his continuation of Robert Parker’s Spenser series. Don’t be shocked if some (or all) of those titles make the Top Ten for 2016.

It’s not that I won’t give other authors a chance; it’s just that the above-mentioned writers are working at the top of their respective games. Atkins is particularly impressive these days – remove his name from the Colson and Spenser books, and I doubt many would guess they are written by the same man. His ability to cultivate two distinct voices (with one being a frighteningly accurate mimic of one of America’s great crime writers) is an achievement that doesn’t get the recognition it deserves.

2015’s list also features a return to the world of sprawling sci-fi/horror epics by Robert McCammon; a rollicking memoir-slash-essay collection by Parks and Recreation standout Nick Offerman; and a pair of debut mountain noir novels by Brian Panowich and David Joy. 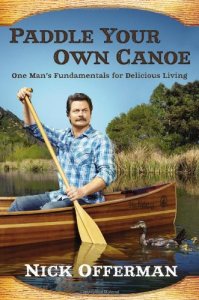 But if I had to pick my favorite of the bunch it would be Lansdale’s Paradise Sky, a sprawling Western jam-packed with the author’s trademark humor, unflinching violence and unparalleled character work. It’s maybe my favorite Lansdale of them all, and I don’t say that lightly given my adoration of the Hap and Leonard books. If I had one literary wish for the New Year that I was guaranteed would be granted, it would be for Lansdale to write more stories about Nat Love.

Here’s the full list of 2015 favorites, alphabetical by author because, other than putting Paradise Sky at the top, it would be impossible for me to rank these any other way. These are all stellar efforts by a group of incredibly talented writers, and if any of them are unknown to you I encourage you to seek them out.

Kickback by Ace Atkins
The Redeemers by Ace Atkins
The Acolyte by Nick Cutter
October Dreams II edited by Richard Chizmar and Robert Morrish
Where All Light Tends to Go by David Joy
Finders Keepers by Stephen King
Paradise Sky by Joe R. Lansdale
The Border by Robert McCammon
Paddle Your Own Canoe by Nick Offerman
Bull Mountain by Brian Panowich

The Lost Level by Brian Keene
October Dreams II edited by Richard Chizmar and Robert Morrish
Tortured Souls: The Legend of Primordium by Clive Barker
Jacaranda by Cherie Priest
The Glittering World by Robert Levy
Where All Light Tends to Go by David Joy
Dark Screams Volume 2 edited by Brian James Freeeman and Richard Chizmar
The Scarlet Gospels by Clive Barker
Sing Me Your Scars by Damien Angelica Walters
The Silence by Tim Lebbon
The Shining by Stephen King
Nothing Lasting by Glen Krisch
The Acolyte by Nick Cutter
Kickback by Ace Atkins
Rumrunners by Eric Beetner
Paddle Your Own Canoe by Nick Offerman
The Border by Robert McCammon
Mercy House by Adam Cesare
White Knuckle by Eric Red
Finders Keepers by Stephen King
Bull Mountain by Brian Panowich
Working for Bigfoot by Jim Butcher

The Redeemers by Ace Atkins
Midian Unmade edited by Joseph Nassise and Del Howison
Paradise Sky by Joe R. Lansdale
Thieves Fall Out by Gore Vidal
Teaching the Dog to Read by Jonathan Carroll
Blue World by Robert McCammon
The Pretty Ones by Ania Ahlborn
Gator Bait by Adam Howe
Where We Live and Die by Brian Keene
The Art of Horrible People by John Skipp
Stinger by Robert McCammon
Voices of the Damned by Barbie Wilde
Dead Ringers by Christopher Golden
Fender Lizards by Joe R. Lansdale
Sour Candy by Kealan Patrick Burke