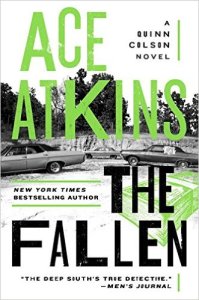 Down in Jericho, Mississippi, a group of men in Donald Trump masks burst into a bank with the intentions of cleaning out the cash from the big Wal-Mart Presidents’ Day Sale. A few miles down the road at Vienna’s Place (formerly the more succinctly-named Booby Trap), Fannie Hathcock, owner and proprietor, has taken a hammer to a customer’s face.

Back in 2014, Ace Atkins co-authored an article with Michael Fechter for Outside magazine about a man named Jamie Smith. According to the article, Smith built a mini-empire based in large part on his wildly colorful background as an ex-CIA agent, Harvard graduate, and expert on weaponry and wartime tactics. Smith appeared on major news networks to talk about couterterrorism, and he ran a school for weekend warriors out in Mississippi. He convinced a Pennsylvania couple to hand him over $12 million dollars he promised to invest for them. He signed a book deal with William Morrow.

Then, as suspicions that his highly-touted background was nothing more than a carefully constructed house of cards began to bear fruit, Jamie Smith disappeared. END_OF_DOCUMENT_TOKEN_TO_BE_REPLACED

Nick Travers’ musician friend Fats is dead, and his saxophone—a vintage 1940s beauty—is missing. Determined to honor the memory of his late friend the only way he knows how, Travers sets out through the rain-soaked streets of New Orleans to recover the sax.

The plot of Last Fair Deal Gone Down, adapted from the short story of the same name by Ace Atkins, doesn’t get much more complicated than that, leaving Atkins and artist Marco Finnegan plenty of room to revel in the seedy Crescent City atmosphere.  END_OF_DOCUMENT_TOKEN_TO_BE_REPLACED 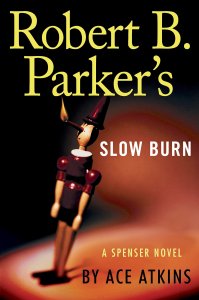 Boston is burning, one abandoned building at a time.

It is a year after the fire that consumed the empty shell that was once the Holy Innocents church – a fire that resulted in the deaths of three Boston firefighters. Those deaths still haunt Jack McGee, a fellow firefighter who has grown increasingly frustrated with his own department’s investigation into the incident. So frustrated, in fact, that he does the near-unthinkable and reaches outside the firefighter family for help. The man he calls on is a P.I. named Spenser. END_OF_DOCUMENT_TOKEN_TO_BE_REPLACED 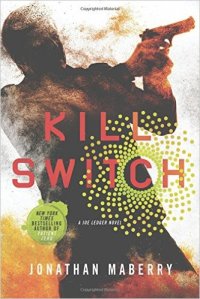 If I laid out the entire plot of Kill Switch, the eighth book in Jonathan Maberry’s Joe Ledger series, it would read like a synopsis of four or five books in two or three different genres. Most times, that would be a recipe for disaster, but Maberry somehow keeps all the balls in the air for over 500 pages, resulting in a satisfying thrill ride of a book.

Because I feel like I should offer some kind of synopsis, I’ll boil it down like so: Ledger and his crack team of operatives uncover a massive machine of mysterious intent at a remote military base in Antarctica – i.e., another day at the office for these guys. But things begin to diverge far from the norm as a hidden city and some giant penguin-like creatures come into play. Agents throughout the Department of Military Sciences (Ledger’s home turf), as well as agents of the CIA, FBI and other organizations, begin blowing assignments and, in some cases, committing outright acts of betrayal and treason. Strange power outtages in major American cities cause confusion and result in tragedy. Carefully constructed security measures are breached, allowing digital information and dangerous laboratory specimens to fall into the wrong hands. We learn that H.P. Lovecraft’s stories may be more fact than fiction. Meanwhile, a new prophet is emerging in the Middle East, and a child genius who may not be entirely human is constructing something called a God Machine. END_OF_DOCUMENT_TOKEN_TO_BE_REPLACED

Chris Ould’s The Blood Strand is a solid start to a promised trilogy of novels set in the Faroes islands, a small, isolated community that’s just as complicated – and captivating – as the novel’s characters.

British police detective Jan Reyna was taken from the Faroes by his mother when he was just a child, and he’s never known why. Reyna returns when his estranged father falls ill, only to find his father has been implicated in a murder investigation. Evidence from that case points to blackmail, and the entire sordid affair begins to turn back in ever-tightening circles to include more members of Reyna’s family. END_OF_DOCUMENT_TOKEN_TO_BE_REPLACED 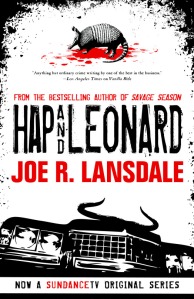 After nine novels and a number of short stories and novellas, sitting down with a new Hap and Leonard book is less like reading and more like meeting up with a couple of buddies to have a drink and swap some stories. That’s just about the highest compliment I know how to pay author Joe R. Lansdale, who has created a set of timeless characters who seem to live and breathe outside of his own considerable imagination.
END_OF_DOCUMENT_TOKEN_TO_BE_REPLACED

Mark Morris continues his time-travelling, genre-smashing Obsidian Heart trilogy with The Society of Blood. Like any good trilogy middle child, Society is unencumbered by the need to set up plot points or tie up storylines; instead, it can simply take what’s been put into place and run wild until it’s thoroughly exhausted. And run wild it does, taking readers on a trip from Victorian times back to the modern world, with a plethora of ghastly murders, surreal villains and plot twists along the way. END_OF_DOCUMENT_TOKEN_TO_BE_REPLACED

In my 2014 reading recap, I discussed how a number of familiar names dominated that year’s Top Ten, and I predicted that several of those names would resurface in 2015 – names like Joe Lansdale, Ace Atkins and Stephen King. Well, not only did that prediction come true, but I’m making a similar prediction for 2016. Lansdale has both a Hap and Leonard novel and a Hap and Leonard short story collection on deck; King has the finale of his Bill Hodges trilogy ready to go; and Atkins will once again favor us with new entries in his Quinn Colson series and his continuation of Robert Parker’s Spenser series. Don’t be shocked if some (or all) of those titles make the Top Ten for 2016. END_OF_DOCUMENT_TOKEN_TO_BE_REPLACED

You might not expect a guy who writes unflinching horror to also write rawly accurate coming-of-age stories.

If that’s the case, you might not be familiar with Joe R. Lansdale.

Lansdale writes about all of the above, and more. But this isn’t a career retrospective of one of my favorite writers, it’s a review. The book we’re looking at is the one I mentioned about the small-town girl looking for direction in a directionless life. It’s called Fender Lizards, it was recently released by Subterranean Press, and it’s damn good.

Dorothy “Dot” Sherman is a seventeen-year-old Fender Lizard, which is to say she’s a roller-skating waitress at a local diner called the Dairy Bob. Her father took off years ago – a classic case of “gone to get a pack of cigarettes and never came back” – and she’s living in a small trailer with a fairly large group of people. Her family has added a new member, an uncle she never knew she had named Elbert. Elbert has parked his van in their front yard and is living out of it, trying to connect with his brother’s family.

In fact, it seems like everyone in Fender Lizards trying to make some kind of connection – some with other people, and some with life itself. Elbert’s sudden appearance is just one of a handful of sparks jolting Lansdale’s richly-drawn cast out characters out of their stupors. There’s also a new suitor for Dot; an escape from an abusive husband for Dot’s sister, Raylynn; and a travelling roller derby for Dot and her fellow Lizards from the Dairy Bob. Lansdale lays out these various threads and developments just as natural as you please, and it’s a delight watching these people all realize that there really is something out there for each of them to strive for.

I could go on for days about Lansdale’s natural storytelling ability, in particular his exceptional ear for dialogue. But perhaps his most amazing achievement in this particular book is his ability to write a teenage girl that is not only recognizable as a vintage Lansdale character, but is also recognizable as, well, a teenage girl. Dot is not a caricature; she is a fully realized person, a young woman with a bit of a short fuse and a sassy mouth; a girl who can get her feelings hurt, who can be a bit jaded sometimes, but who hasn’t completely lost the ability to dream of something different, something better. There’s hope in her, and it’s something she shares with everyone around her.

Fender Lizards is a relatively short novel, and Lansdale doesn’t attempt to put a neat bow around everything, which is refreshing. We come into Dot’s life at a certain point and we leave at a certain point, and at that point some things have changed and some things are still up in the air. I’d like to know more, and perhaps Lansdale will revisit Dot and her friends and family one day; but if not, I’m happy with the time I got to spend with them. I think you will be, too.