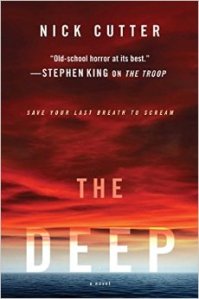 I stopped taking notes about halfway through The Deep, because taking notes was interrupting the flow of the story, and I really didn’t want to put the book down.

That’s the first cliché I’ll use in this review: “I could not put this book down.” No promises that it will be the last.

I expected to like The Deep. I thoroughly enjoyed the first book by “Nick Cutter” (actually Canadian novelist Craig Davidson), The Troop, when I read it earlier this year (I’d link to the review I wrote for FEARnet, but FEARnet, alas, is no more) so I figured I’d enjoy this one too. What I didn’t expect was to be bowled over, knocked out, roughed up and just plain blown away by The Deep. (How many clichés was that?)

But here – let me catch my breath, give you some details on the book, and return with a less hyperbolic appreciation of it, shall I? The Deep follows veterinarian Luke Nelson to the deepest point of the ocean, the Mariana Trench, where he’s been summoned by his brother Clayton. Clayton is a brilliant scientist who has been eight miles down for some time, working with a strange undersea substance called “ambrosia” that may offer a cure for “The ‘Gets,” a mysterious plague that is slowly eroding the minds of people all over the planet. One of the scientists working with Clayton has already returned to the surface in some distress, and there’s real concern that things have gone terribly wrong  down below.

Luke boards a sub piloted by Alice “Al” Sykes, a Navy commander with several trips to the undersea research lab, the Trieste, already under her belt. It’s a potentially boring trip, but Cutter – who has slowly been turning the tension up by degrees – takes the opportunity to set readers and characters alike on edge. By the time the duo reach the Trieste, there’s a palpable sense that things have already gone wrong and yet are about to get much, much worse. (Spoiler alert: they do.)

Real dread and fear are difficult things to conjure in written form, but that’s exactly what Cutter accomplishes in The Deep. The sense of isolation is oppressive, and the longer Luke is under water the more it becomes apparent that nothing in his life – not this expedition, and nothing in his tragic past – has been mere fate. “Everything happens for a reason” is yet another cliché, but it’s a concept that Cutter wields in new and surprising ways here.

While the atmosphere Cutter builds in these pages is admirable, this is not a “quiet” horror novel. Those who enjoyed the buckets of blood he slopped around the pages of The Troop will find plenty more where that came from, utilized here with even more precision and impact. The unflinching gore is one place where the shadows of Stephen King and Clive Barker – Cutter/Davidson has credited both as major influences in the past – fall heavily over this book. King is especially present here; the Trieste, in all its silent, purposeful malevolence, could just as easily have been called The Overlook.

There’s an abundance of spider imagery in the book, another nod to King, perhaps, one of a couple that can be traced back to King’s massive novel It – there’s also a stand pipe in Luke and Clayton’s past that will remind many of a similar location in King’s town of Derry. You could argue that maybe there’s a touch too much spider imagery, as every description of fear seems to involve tiny legs tracing up someone’s spine, or something light scuttling across a character’s scalp, or some such – even the Trieste is described in one particularly vivid section as spider-like. It was enough that it eventually began to pull me out of the story when it occurred, but I have to admit it was damn effective every time, so I really can’t count it as an issue.

The Deep was the last book I finished in 2014, and it promptly shoved its way into my top ten reads of the year. It’s an exciting start for the horror genre in 2015, and a great next step for Cutter. This is going to be a tough one to top in the new year.

2 thoughts on “Review: THE DEEP by Nick Cutter”