In October 2012, Kealan Patrick Burke and Thunderstorm Books will release Nemesis: The Death of Timmy Quinn, the fifth and concluding chapter in the Timmy Quinn series. As a fan of these stories from the beginning I wanted to commemorate this endgame in some way, so I invited Kealan to take part in a series of interviews, one based on each of the Timmy Quinn books, leading up to the final book’s release. We continue that series today with a look back at the second Timmy Quinn book, The Hides, originally published in hardback by Cemetery Dance.

The Cemetery Dance edition of THE HIDES, with cover by James Higgins.

OC: The Turtle Boy came out in 2004, and The Hides was released in 2005 – a relatively quick follow-up. When did the idea for the sequel present itself? Was there something that triggered it, the way the sight of your stepson and his friend exploring in the woods triggered The Turtle Boy?

I actually hadn’t considered a sequel until I spoke to Richard Chizmar at Cemetery Dance after he’d read The Turtle Boy. I had published an anthology and some short stories in the magazine with CD by then, but no standalone fiction, and I was eager to do so. When Rich expressed a desire to see something in the vein of The Turtle Boy, I decided to play it safe and keep whatever I wrote in the same universe as that novella. As soon as I made that decision, I wondered where we might find the characters from The Turtle Boy if we moved ahead in time a few years. I found myself intrigued by the notion that Timmy might have not just the dead, but teenage angst to deal with too. I’d already been mulling over a ghost story set in my hometown, so the stage was set—excuse the pun—for Timmy’s adventures to take him there in The Hides.

The Hides takes place in Dungarvan, Ireland, which just happens to be your hometown. What prompted the switch in settings from a small American suburb to Ireland? Was it homesickness, story-driven, or a little of both?

It was a little of both. At the time, I hadn’t written very much fiction set in my hometown, and I wanted to do something that both addressed its turbulent history and incorporated the feel of the place. Plus, I hadn’t been home in many years and researching it through the town’s historian, photographs, and my own memories of it, was a way to revisit.

Was it easier to write about your hometown as opposed to a fictional or less familiar place?

Familiar settings are always easier, though I enjoy making places up from scratch just as much. With The Hides, I had to do a little of both, because some of the buildings where much of the action takes place are no longer there, so I had to rebuild them using my own imagination, memories, and notes from the town historian. I set the story decades ago and Dungarvan has changed an awful lot since then.

I feel like the setting is almost another character in The Hides – it seems to be much more a part of the story than the setting of The Turtle Boy. How much of the direction of the Timmy Quinn series from this book forward can be attributed to moving it to Ireland?

When I think of Ireland, I immediately get a sense of age, a sense you get when you’re there. So I think in bringing Timmy to Ireland, it gave me the idea that whatever was responsible for these revenants, or whatever they are, was very old, and not limited to any one place. I also liked the notion that the geography works in tandem with Timmy’s emotions at the time. This starts with The Hides and is compounded in the next novella, Vessels.

This is also the book where the use of theater metaphors really pick up – The Curtain, The Stage, even a mention of stage whispers. Where did that theme come from?

I always had the visual in mind of shadowy figures standing just beyond our ability to see them, and kept out of sight by a tattered curtain. As I started The Hides, this visual grew stronger, and the idea of actors (the dead) awaiting their turn in the limelight (revenge) took hold. Add to that the fact that I did quite a bit of theatrical work myself in Dungarvan, and it seemed very fitting indeed. But it wasn’t until Nemesis that it made complete sense to me in the context of Timmy’s world. The final book is very much about the genesis of that metaphysical theater, so hopefully that will serve as more complete answer to your question! 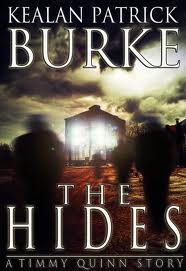 The digital edition of THE HIDES.

It’s hinted that the years between the events of The Turtle Boy and The Hides have been tough for Timmy. Any chance we’ll get to read about those years at some point in the future? I’d think some of those encounters would make excellent short stories…

It’s very much a plan of mine to do a collection of stories about Timmy’s (mis)adventures in the periods between the books, for completion’s sake and to sate my own curiosity. I already have some interesting ideas I’m looking forward to exploring.

This book goes a long way toward establishing the rules of what’s going on in Timmy’s world – how he interacts with the ghosts, why they appear for him, etc. Did you have those rules worked out ahead of time, or were you discovering them as you wrote?

I had some idea, but truthfully, not much. I’m a make-it-up-as-I-go-along type writer, which is sometimes a good thing, sometimes not. When it comes to a series, it helps if you have a guideline, a set rulebook. I didn’t, but once the basic rules came to me, I found it easy to build on them. And though I didn’t know it as I was working from book to book, those rules made for a very interesting finale, one that seemed to suggest to me as I was writing Nemesis, that I had more an idea than I realized about where it would all lead. That’s kind of what Nemesis is about too: the nature of artistic creation.

Did you get feedback from friends or family back home in Dungarvan about the havoc you wreaked on the place?

Yes, and I loved it. My own mother was freaked out every time she passed the Moresby Buoy after reading the scene in which the dead woman appears there. And as the book was available in the local library, many of the townspeople wrote to tell me they haven’t looked the same way at some of the local landmarks since. I even had American readers of mine include the town in their visits to Ireland. They all but used the book as a tour guide, which is amazing.

How much of Dungarvan’s history as presented in The Hides is based on actual events?

Almost all of it. We did have Nazi U-boats patrolling the harbor and a lot of IRA activity at the time. The names are all fictional, of course, as are the events that led to the hauntings.

What kind of reception did The Hides receive upon its release? Did it help bring more attention to The Turtle Boy? And is this the point where you started to get encouragement to keep the Timmy Quinn series going?

The Hides did very well, or at least, as well as a 750-copy release can do. It got some nice ink in the trades, was reviewed well among readers, and picked up a Bram Stoker Award-nomination. So I was happy with the reception, and it definitely helped get other publishers interested in the series, which led to the publication of Vessels a year later. And more readers were discovering the books, sometimes working their way backward to read them all. The problem was, The Turtle Boy was long sold-out and only available on the secondary market for insane prices, so it was hard to grow the readership by any substantial degree, and this was disheartening. To counter this, I combined the first three novellas into a standalone novel entitled Brethren, which I sent to Leisure Books. After two years of waiting, I hadn’t gotten an answer, so I withdrew it. The series might never have gone any further after Cemetery Dance published Peregrine’s Tale, if not for digital, which saw a massive increase in the popularity of the books and vocal demand from readers for the next installment in the series. So it took almost ten years for the real encouragement to kick in, and for that I’m endlessly thankful.

Catch up on the series with Stage Whispers: The Collected Timmy Quinn Stories

Nemesis will be available as a signed, limited edition hardcover from Thunderstorm Books. Thunderstorm is also prepping a deluxe edition of Stage Whispers: The Collected Timmy Quinn Stories that will include Nemesis, which is not included in the current digital edition. Visit Thunderstorm Books for more information.

10 thoughts on “Interview: Kealan Patrick Burke on THE HIDES”